Displaced due to flooding

Lake Tanganyika and its surrounding rivers were normally natural resources for sustaining the lives of many people in Burundi particularly those living in Imbo flat which comprise four provinces of west and southern Burundi. Farmers growing rice and maize have facilities to drain fields because of the rivers. Lake Tanganyika provides different sorts of fish that generate incomes and food for families. Beaches are the favourite places for many people and tourists.

For the past three years people have started to perceive those natural resources differently as another side of the lake and its rivers has been revealed. Scientists have indicated that Lake Tanganyika and surrounding rivers are more likely to overflow and cause flooding to riverside areas due to an increase in heavy rains.

Thousands of families have been forced to flee the flooding caused by the lake and rivers as villages have been swamped. Houses, schools, churches and fields have been seriously affected. Displaced families have struggled to find a place to go and had to face challenging living conditions.

The government has provided temporary camps that have admitted some of the survivors of the floods while others are struggling to start a new life in safer areas far from their homes. 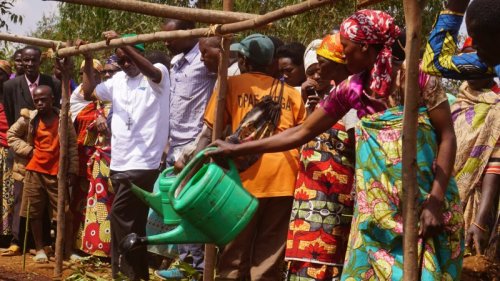 Partners of the government and NGOs have been mobilized to respond to this humanitarian emergency that has changed the life style of thousands of people. Food and non-food items, sanitation and health services, children’s education, women and children’s protection against abuse are all major concerns that governors and partners have been addressing since the occurrence of flooding a few months ago.